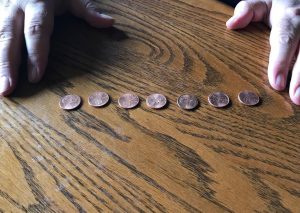 How would you like to magically transfer a number of coins from one hand to the other, with no secret moves, and all spectator’s eyes on you at all times?

This trick is so easy that a beginning magician could do it, yet so baffling that, after 50+ years in magic, I still perform this trick for small groups, when I have nothing on me, except a pocketful of change, and I want to tell a story with a few jokes, thrown in.

One historical note: This trick was originally performed with matchsticks or toothpicks. I decided to use coins over 30 years ago, when … I didn’t have any toothpicks handy. When I used toothpicks and matches, my story revolved around two magicians and five magic wands.

Now that I use small coins in my story, I have two magicians and:

Here’s the performance and presentation, combined. We’ll discuss the secret AFTER the trick, believe it or not:

2. Explain that two of the coins represent magicians. Separate the coin and the coin on the far right just a little from the line.

Now, you have a coin, a space, five coins, a space, and a final coin. The two separated coins are your magicians.

3. Each hand picks up a magician.

4. You explain that the magicians decide to divvy up the magic stones. (At this point, you 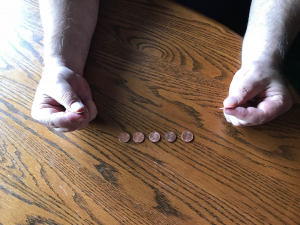 might want to ask for some audience input as to what the magic stones are able to do.)

Turn your hands palm up and show that each hand has a coin (magician). Then close the hands, and turn them palm down, again.

5. At this point, with your actions, make it apparent that you are keeping the hands apart. Now, pick up one coin with your right hand (if you’re a 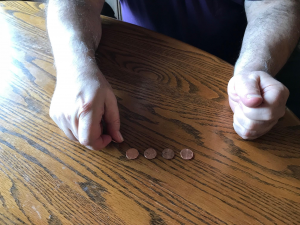 lefty, then start with your left hand).

Next, pick up a coin with the other hand. Keep alternating, until all 5 coins have been divided between the two magicians. No counting necessary. Simply make it apparent by your actions that you are alternating hands and that the hands never come near each other. 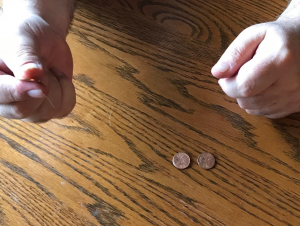 Note: Do NOT under any circumstances open your hands, to reveal how many are in each. Stay focused on the story.

6. One magician accuses the other of having more magic stones. So, they lay them down one at a time. This time, without making a big deal about it, you start emptying the coins one at a time, starting with the hand that did NOT begin the pick up.

So, if you first picked up the coins with your right hand, now, you’d be replacing them on the table starting with the left hand. Keep your hands closed as you place each coin on the table. 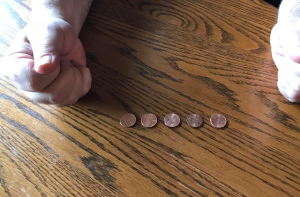 Keep alternating, until there are 5 coins on the table.

At this point, you are ahead of the game. The spectator thinks you have one coin in each hand, when secretly, one hand has two and the other doesn’t have any.

8. The magicians realize that there are an odd number of magic stones. Since they can’t break one in half and have it retain its magic qualities, one of them will have to get it.

You explain this, as you pick the stones (coins) back up. Start with the hand that secretly has two coins.

Continue alternating picking them up.

You should have one hand with two coins, and the other will have all the rest (5 coins).

All that remains is the big reveal ….

10. You explain that one magician was indeed greedier than the other. Place one coin from each hand on the table.

These represent the two magicians. 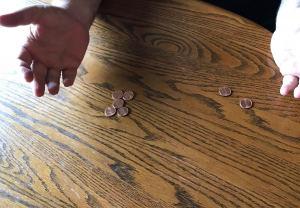 Then show that one magician only got one magic stone … dump the coin onto the magician (tabled coin), and the other magician got the rest. Dump the (4) coins from the other hand on its magician, making 5.

11. Accept your applause, and scoop up your coins.

A) This trick works, because you always pick up starting with one hand, and you replace on the table starting with the other. It’s this subtle change between the two pick ups and the one replace in the middle that makes the magic happen.

B) Make sure you use the same denomination of coin. You want them all to look similar, all old, or all shiny. Keep extra dimes in your pocket. Or pennies.

B) Keep your fists closed in both the pick up and the set down. Don’t show how many coins are in each hand until the big reveal, at the end. That’s when you’ll open your hands and dump the coins….

C) I think it makes a much better effect, if you put down one magician (coin) from each hand, first … before the Big Reveal. This way, when you do the big reveal, you only have one coin in one hand, and five in the other.

D) After you show that the magic has occurred, dump the coins onto the magician on the table. Leave the spectator with the image of a pile on one side and only a couple on the other.

E) Finally, this is the perfect time for you to perfect some of your storytelling skills. Avoid all “um,” “uh,” and “like.” If you can think of any other filler words, that don’t add any meaning to the story, eliminate those, too.

Your story, which doesn’t have to be about magicians, needs a beginning, a middle, and an end. If you don’t want magicians, maybe you’re telling the story of two aliens and their moon rocks.

Or two politicians, one on each side. Be careful with this one … you might easily offend people.

How about two cowboys who come across a diamond mine? Or two inventors? Or Jack (and Jill) and their magic beans. Be sure to mention both the beanstalk and going up a hill to fetch a pail of water.

Speaking of which, adding in a couple of jokes that relate to the story, can build this into a real presentation.

For example, I ask the spectators, “Do you know what the magician said, when he found that one of the flat stones didn’t have magical powers?”

Then I make a motion of side throwing a flat stone out across the water of a lake or pond. Sometimes, I even nod my head and softly say, “One, two, three, four …”

It gets a laugh, even though it’s corny as hell.

Well, there you have it.

Practice it, at least ten times, with your patter (what you’re going to say), before doing it for an actual spectator.

Have fun with this one. And from now on, carry some extra coins in your pocket.

Oh, and borrowed coins are even better. “Three dimes from you, another two here, and I have two. Perfect.”